A yellow arrow appears in the margin next to the DisplayWelcome function call. The yellow arrow indicates that this is the next statement to be executed. 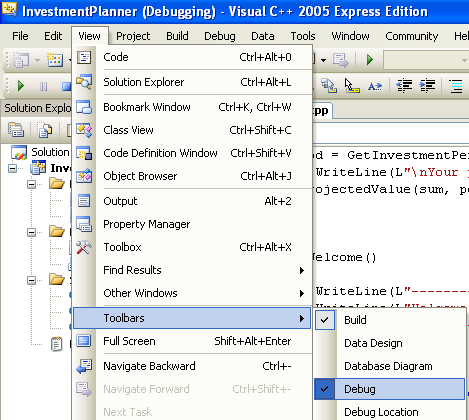 The Locals window displays five local variables. The first three variables, amount, years, and rate, are the function parameters. These variables are already initialized with the values you passed into the function. The last two variables, finalAmount and rateFraction, do not have meaningful values because the variables haven’t been assigned a value yet. In fact, the debugger is a little misleading here because the finalAmount and rateFraction variables haven’t been declared yet. These variables don’t really exist until the variable declaration statements further on in the function. 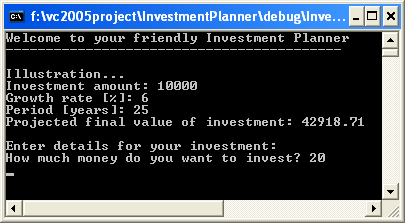 If the debugger takes you into a function that you’re not interested in stepping through, press Shift+F11 to step out of the function. If you just want to run the application without stopping at all, press F5.

Console::Write(L"\nNumber of your functions called: "); 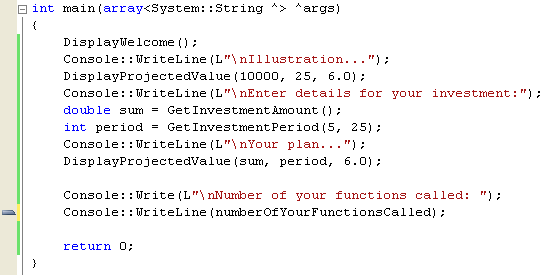 Visual C++ lets you provide many functions with the same name, as long as each function has a different parameter list. This process is known as function overloading. Function overloading is useful if you have several different ways of performing a particular operation based on different input parameters. For example, you might want to provide an average function to find the average value of two double values, and you might have another average function to find the average value of an array of integers. You can define two functions to support these requirements. Give each function the same name, average, to emphasize the common purpose of these functions. Define different parameter lists for the functions to differentiate one from another.

In the following exercise, you will define an overloaded version of the DisplayProjectedValue function. The new version will calculate a random growth rate between 0 and 20 percent, rather than use a specific growth rate. 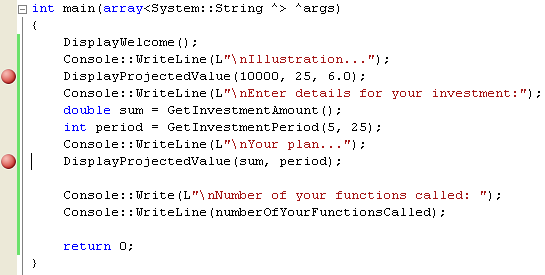 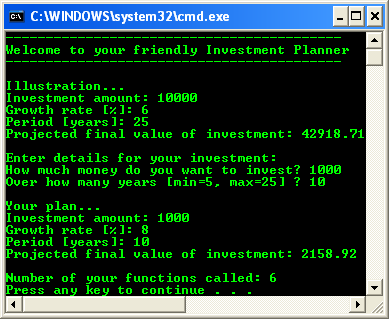 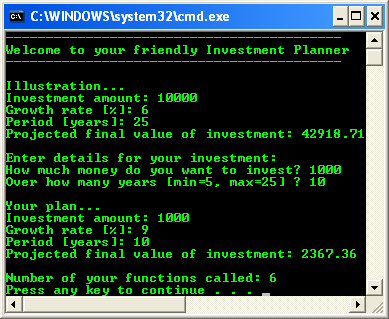