2.   Start the debugging session by pressing F5. Once the program has loaded, it will execute and stop at the breakpoint. You can now use the Locals window at the bottom of the screen to look at the structure of the Point type.

3.  If the Locals window isn’t displayed in debug mode, display it by pressing Ctrl+Alt+V followed by L. You should see an entry for the variable p1. Any type that has internal structure such as Point will have a plus sign (+) to the left of the variable name.

4.   Click on the plus sign to expand the structure. You’ll see a display similar to the one shown in the following figure.

You can see that p1 has three entries under it. The first shows that it’s derived from System::ValueType, which is in turn derived from System::Object. The other two are the x and y members, which are both 32-bit integers. At this point in time, they haven’t been given a useful initial value.

5.   Press F10 (Step Over) three times to initialize p1 and execute the next two assignment statements. This action will result in p1 being initialized, and you will see the values of x and y change to 10 and 20, respectively. The values also change from black to red in the Locals window, showing that they were changed in the previous execution step.

6.  Continue pressing F10 to single-step through the code, examining the changes that occur to p1. When you’re done, click the Stop Debugging button on the toolbar (a blue square) or press Shift+F5.

Differences Between Structures and Classes

Implementing Constructors for a Struct

In the next exercise, you will add a constructor to the Point struct so that instances can be initialized on creation.

1.        Continue using the project from the previous exercise.

2.        Add the following line immediately after the public declaration in your Point structure definition:

3.        You can now edit and add extra code to your main() function to create initialized Points shown below.

// Write to the standard output 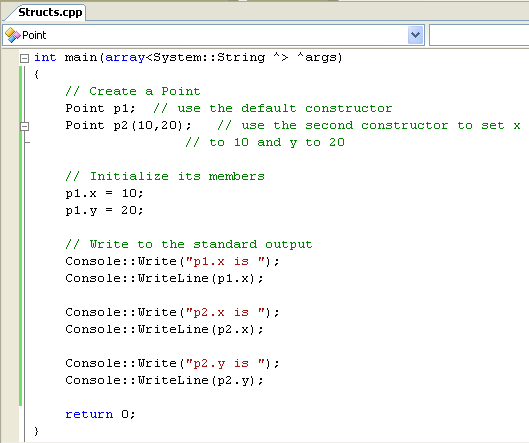 4.        Compile and run your program. The output should be something shown below.