Native arrays are those provided as part of the C++ language. They’re based on the arrays that C++ inherits from C. Although native arrays are designed to be fast and efficient, there are drawbacks associated with using them, as you’ll see shortly. This first exercise will introduce you to C++ native arrays by showing you how to create an array of value types and how to use the array. 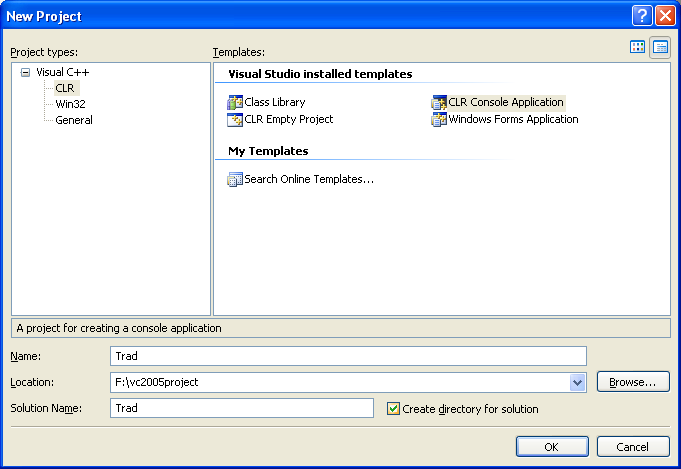 2.        Open the source file Trad.cpp and add the following code to the main() function: 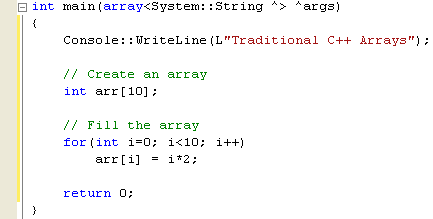 The array is created by giving a type, a name, and a size enclosed in square brackets ([]). Here the array is named arr and it holds ten int values. All arrays are created using the same syntax, as shown here:

// Create an array of six doubles

The array size has to be known at compile time, so, for example, you can’t ask the user for a value and then use that value to specify an array dimension at run time. However, it’s common to create constants, either by using preprocessor #define declarations or by declaring const int variables, and using them to specify array dimensions. For example:

As you can see from the loop in the preceding code, array elements are accessed using square brackets that contain the index. Here’s the second important point about native arrays: indexing starts from zero rather than one, so the valid range of indices for an array is from zero to one less than the size of the array. In other words, for a 10-element array, valid indices are [0] to [9].

4.        Build and run your program. You should find that the values print, one to a line, as shown in the following figure. 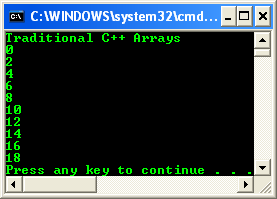 What happens if you change the range of the second loop so that it tries to print the element at [10]? 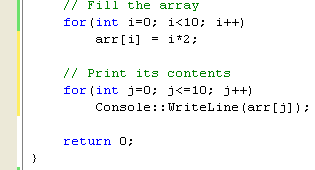 Notice the less than or equal to (<=) condition. The effect of this condition is to try to print 11 elements rather than 10.

6.        Compile and run the program, and you should see output similar to the following figure. 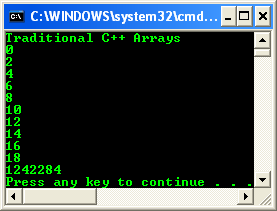 Notice the random value that’s been printed at the end of the list. Here’s the third important point about native arrays: bounds aren’t checked. Native arrays in C++ aren’t objects and therefore they have no knowledge of how many elements they contain. It’s up to you to keep within the bounds of the array, and if you don’t, you risk corrupting data, generating buffer overflow and crashing your program. As a security and normal practice, programmers will provide codes that check the limit.

7.        To make the previous code ‘cleaner’ and meaningful, the following is the modified version.

The output is shown below. 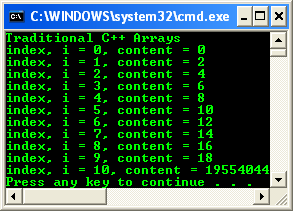