Delegates and events are extremely powerful and important constructs in the Microsoft .NET Framework. Events in particular are used widely in GUI programs as a means of communicating between components, but both delegates and events can be used to good effect in non-GUI code.

The function pointer mechanism in C and C++ has been used by programmers for many years, and it’s a very useful way of implementing mechanisms such as event handlers. Unfortunately, function pointers are a C++ language feature, so they’re of no use in the .NET environment, where features need to be accessible from many languages. Delegates are the .NET equivalent of function pointers, and they can be created and used from any .NET language. They can be used by themselves, and they also form the basis for the .NET event mechanism discussed in the second part of this module.

What Are Function Pointers?

The code declares a function pointer called pf, which can be used to invoke any function that takes two int parameters and returns a long. The following function prototype has the right signature:

What Do Delegates Do?

A delegate is a class that lets you invoke one or more methods that have a particular signature. Here’s a simple example to show when you might want to use a delegate. Imagine that we want to be able to perform operations on numbers by passing a number into a function and getting a transformed value back, like this:

In each case, we are calling a function that has the same signature: one that takes a double and returns a double as its result. With delegates, we can define a mechanism that will let us call any of those methods because they all have the same signature. Not only can we call any of the four methods above, but we can also define other methods and can call them through the delegate, provided that the signature matches. This makes it possible for one class or component to define a delegate, and for other classes to attach functions to the delegate and use it. You’ll see examples of this use of delegates later in the module when we cover events. In this case, we want to use the delegate to call one method at a time, but it’s possible to attach more than one function to a delegate. All the functions will get called in order when the delegate is invoked. The .NET Framework defines the System::Delegate class as the base for delegates that call a single method and System::MulticastDelegate as the base for delegates that can call more than one method. All delegates in managed C++ are multicast delegates.

This exercise uses the numerical operations example from the previous section to show you how to create and use a simple delegate in managed C++ code. 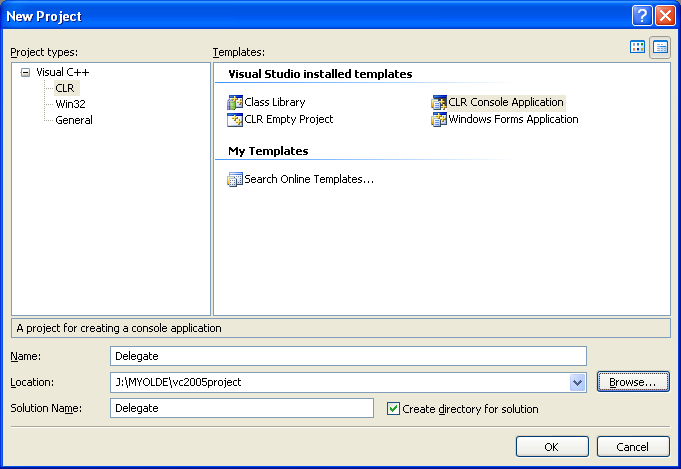 2.        Open the Delegate.cpp source file and add the definition of a delegate to the top of the file, immediately after the using namespace System; line.

The delegate keyword is used to define a delegate. It might look as though this is a function prototype for a function named NumericOp, but it’s actually defining a delegate type that inherits from System::MulticastDelegate. This delegate, named NumericOp, can be bound to any function that takes one double as an argument and returns a double.

3.        All the functions we want to call need to be static members of a class, so add a class to your source code file, above the main function, that looks like this:

The class definition has to use ref to make it a managed class, and it contains one public static method, which simply takes a number and returns its square.

When you declared the delegate, you created a new reference type named NumericOp, so you can now create a NumericOp object. The argument is the address of the function that is to be associated with the delegate, so you use the & operator to specify the address of Ops::square. The object pointed to by pOp is now set up so that it will call the square function when it is invoked, and it will take exactly the same arguments (and return the same type) as Ops::square. You can’t change the function that a delegate invokes once it’s been created. In this respect, delegates differ from C++ function pointers. Every delegate has an Invoke method that you use to call the function that has been bound to the delegate. Invoke will take the same arguments and return the same type as the function being called.

// Call the function through the delegate

6.        You can now easily create another static member, create a delegate, and call the function. Test this out by adding a second static member to the Ops class named cube. 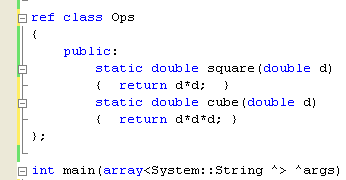 7.        Create another delegate in the same way as the first, but this time, pass it the address of the cube function in the constructor.

// Call the function through the delegate

9.        Build and run your project. The following output should be expected.