2.        Open the Multicast.cpp source file and add the definition of a delegate to the top of the file, immediately after the using namespace System; line.

This delegate, named NotifyDelegate, can be bound to any function that takes one int as an argument and returns void.

3.        You’re going to call two functions through the multicast delegate. Because all functions called by delegates have to be members of a managed class, define two classes at the start of your project, each of which contains a static member function. Add the following code. 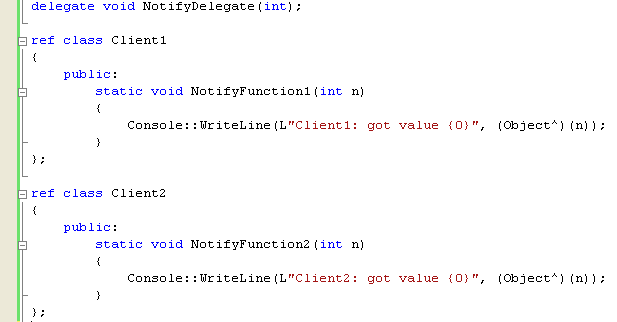 These two classes are almost identical, both defining a single static member function that has the signature required by the delegate.

4.        You want to call the two static member functions through one delegate, but you can’t create a delegate to bind to two functions directly. Instead, you need to create two normal delegates (as you did in the previous exercise) and combine them into a multicast delegate. So, define two delegates in the main function, each of which binds to one of the static methods.

// Bind them to the functions

5.        At this stage, you could use Invoke to use both of the delegates, just as you did in the previous exercise. Build a multicast delegate from pDel1 and pDel2 by using the Delegate class’s static Combine method, like this:

// Combine the invocation lists of the two delegates

Combine is a static member of the Delegate class that takes pointers to two delegates and returns you a new delegate whose invocation list combines the entries from both delegates. You need to use a cast because the pointer returned from Combine is simply a Delegate^ and it needs to be cast into a NotifyDelegate^ before it can be used. In other .NET languages, such as Microsoft Visual Basic and Visual C#, the syntax is simpler, but multicast delegates are still being created using the same mechanism.

7.        When you build and run the program, you should see two lines of output, as shown in the following figure.

Note that the functions are called in the order in which the delegates are combined, so if you want to change the order, you’ll need to change the way you create the multicast.

8.        You can use this multicast delegate as the basis for making up another one. Add the following code.

// Create a second multicast delegate and invoke it

9.        Rebuild and re-run your program. In this case, you’re combining the invocation list of pDel3 twice, which means that you’ll get the output shown in the following figure when you invoke it. 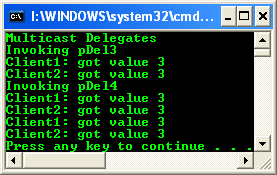 10.     As the final part of this exercise, you can use the Remove method to remove an item from a multicast delegate’s invocation list. Here’s how:

11.     The Remove function takes two arguments: the delegate to be operated on, and the item to remove. If the item to be removed exists in the invocation list of the first delegate, it’s removed. In this example, pDel1 is being removed from the invocation list of pDel3, leaving only pDel2. If you invoke this delegate, you’ll see in the following figure that you get only the output from pDel2. 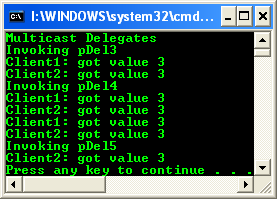