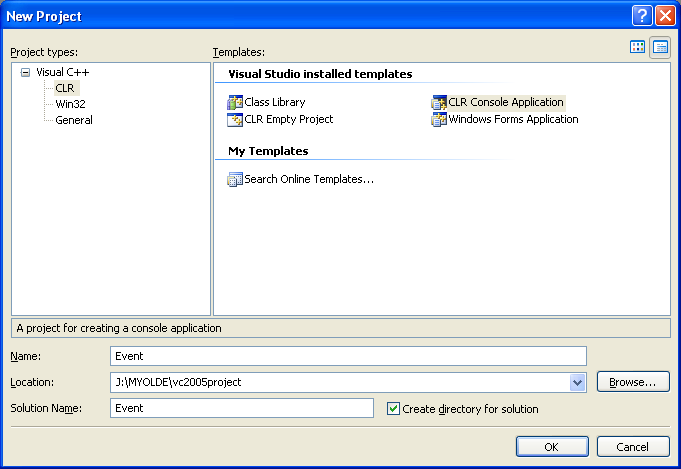 2.        Event sources and receivers use delegates, so define a delegate for each of the events raised by the source. In this example, two events will be used, so open the Event.cpp source file and define the following two delegates immediately after the using namespace System; line: 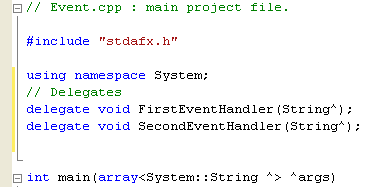 The delegates define the signatures of the methods that event receivers have to implement to handle the events, so they’re often given names that end with Handler. Each of these events will simply pass a string as the event data, but you can make the data passed as complex as you want.

3.        Add the implementation of the event source class to the source file like this: 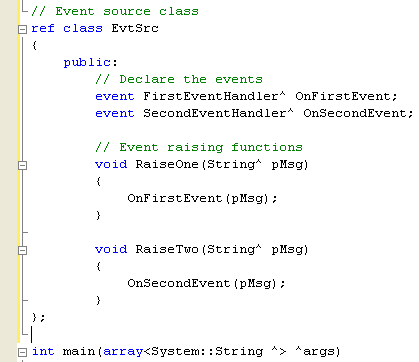 The first thing to note is the use of the event keyword to declare two events. You need one event declaration for each event that you want to raise, and its type is that of the delegate associated with the event. So, in the case of the first event object, the type is FirstEventHandler^ to match the FirstEventHandler delegate. Using the event keyword causes the compiler to generate a lot of delegate handling code for you; if you’re interested in exactly what’s going on, see the following section. You can then use the event objects in the EvtSrc class to raise the events, simply by using them as if they were function calls and passing the appropriate argument.

How Does the event Keyword Work?

The event keyword isn’t only used in managed code, but can also be used to describe events in native C++ classes and COM events. When you declare an event member for a class in managed code, the compiler generates code to implement the underlying delegate mechanism. For the OnFirstEvent event object in the exercise, you get the following methods generated:

The raise method is protected so that it can be called only through the proper channels and not directly by client code.

You now have a class that can be used to fire events, so the next thing you need is a class that will listen for events and act on them when they’ve been generated.

The receiver has to know the event sources it’s working with to be able to subscribe and un-subscribe, so add an EvtSrc^ member to the class to represent the one source you’ll be working with.

5.        Add a constructor to the class that takes a pointer to an EvtSrc object and checks that it isn’t null. If the pointer is valid, save it away in the EvtSrc^ member.

7.        Once you have the handlers defined, you can subscribe to the event source. Edit the constructor for the EvtRcv class so that it looks like the following code:

You subscribe to an event using the += operator. In the code, you’re creating two new delegate objects, which will call back to the FirstEvent and SecondEvent handlers on the current object. This is exactly the same syntax you’d use if you were manually creating a delegate. The difference is in the += operator, which combines the newly created delegate with the event source’s multicast delegate. As you read in the preceding sidebar, += calls the compiler-generated add_OnFirstEvent method, which in turn calls Delegate::Combine. Although you’ve subscribed to all the events automatically in the constructor, you could also use member functions to subscribe to individual events as required. A matching -= operator lets you unsubscribe from events.

8.        Add the following member function to EvtRcv, which will unsubscribe from the first event:

// Remove the handler for the first event

The syntax for using the -= operator to unsubscribe is exactly the same as that for the += operator to subscribe.

Hooking It All Together

Now that you’ve written the event source and event receiver classes, you can write some code to test them out.

// Create a receiver, and bind it to the source

Try building and run your program.

10.     The EvtSrc constructor takes no arguments, while the EvtRcv constructor has to be passed a valid EvtSrc pointer. At this point, the receiver is set up, listening for events to be fired from the source. Add the following codes. 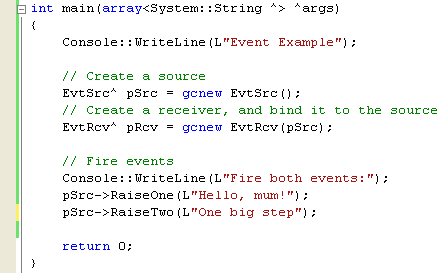 11.     Calls to the source’s RaiseOne and RaiseTwo functions tell it to fire both events. When you run this code, you should see output similar to the following figure.

The receiver has had both handlers called, so it has printed both the messages associated with the events.

12.     Insert some code shown below to call the RemoveHandler function of the receiver, and try firing both events again:

// Remove the handler for event one 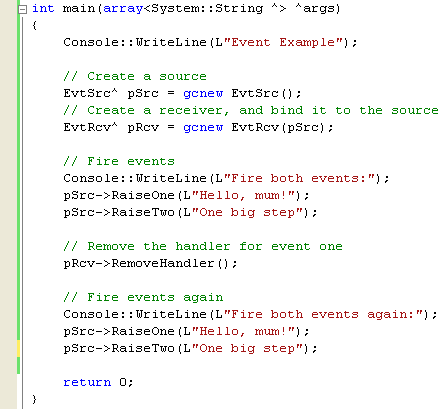 13.     Rebuild and re-run your program. This time you should see only the second message printed because the receiver is no longer handling the first event as shown below.