get me and set me!

You don’t always have to provide get and set methods for a property. If you don’t provide a set method, you end up with a read-only property. If you omit the get method, you’ll have a write-only property (which is possible, but a lot less common than the read-only variety). The following exercise shows how to implement a read-only property, and it also illustrates how to create a derived property. You’ll change the Person class from the previous exercise so that it includes a date of birth rather than an age. The derived AProperty property will then calculate the person’s age from the date of birth; it’s obviously a derived property because you can’t change someone’s age without changing his or her date of birth as well. It’s also obviously a read-only property because it’s always calculated and cannot be set by users of the class.

1.   Either start a new CLR Console Application project, or modify the one from the previous exercise. Enter or edit the definition of the Person class so that it looks like the following code. Place it after using namespace System; and before the main() method:

The class now has four data members: a String for the name and three integers to hold the date of birth. A second constructor for the class is used to create an object with the date of birth set from the arguments. It would be neater to use a System::DateTime object to represent the date of birth, but you can’t have pointers to managed types as members of a ref class. The AProperty property now has only a get method, which retrieves a DateTime object representing the current date and time and then calculates the age from the difference between the current year and the stored year.

2.        Use the NProperty and AProperty properties as you did in the previous example, shown below:

3.        Build and run your program. The following output should be expected.

Now that you know how to implement a scalar property, let’s move on to consider indexed properties, also known as indexers. These are useful for classes that have data members that are collections of items, and where you might want to access one of the items in the collection.

An example might be a Bank class that maintains a collection of Accounts. If you’re not using properties, you’d tend to see code such as the following being used to access members of the Bank class using a method (getAccount):

// Set the overdraft limit for one of the accounts

The following longer exercise walks you through implementing the Bank and Account classes, and it also shows you how to create and use both the scalar and indexed properties. 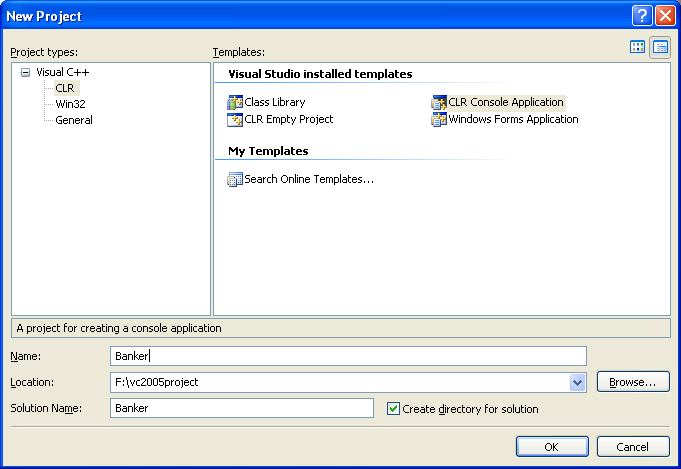 2.   Add the definition for a new class named Bank by right-clicking the project name in Solution Explorer, choosing Add from the pop-up menu, and then choosing Class from the hierarchical menu that appears. 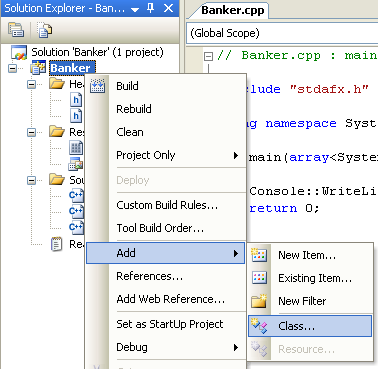 3.   The Add Class dialog box opens, in which you choose the type of class you’re going to add. Make sure that the C++ Class Categories and C++ Class Template is selected before you click Add. 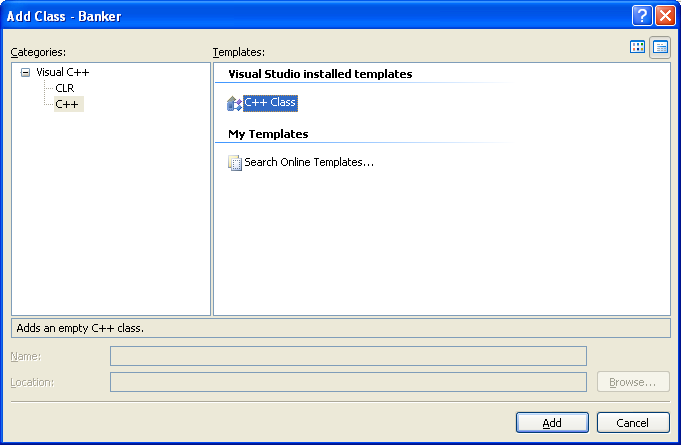 4.  The Generic C++ Class Wizard constructs the skeleton of a new class for you. Fill in the fields (when the Class name: field is filled, other fields will be filled automatically, just accept the given names) with Bank as shown in the following figure. Make sure the Managed tick box is selected and then click Finish.

5.        Open the implementation file Bank.cpp, and make the corresponding changes. Add a call to Console::WriteLine in the constructor so that you can verify that it has been called.

Don’t forget to put the using namespace System; in order to use the Console::WriteLine. The file should look like this when you’ve finished editing:

6.        To ensure that everything is correct, open the Banker.cpp file and add code to the main() function to create a Bank object:

7.  You must also include Bank.h to the Banker.cpp file so that the compiler will know where to locate the declaration of the Bank class. Add the following code to Banker.cpp after the #include "stdafx.h" line: 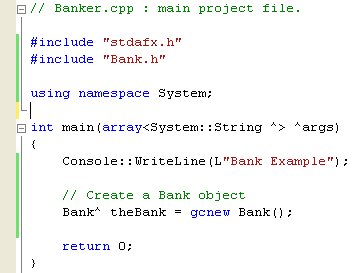 9.        Compile and run this code and you should see the constructor message being printed on the console as shown below.