Web Services and the Future

Web services provide a way to move toward a service-based computing model. As the world becomes more and more interconnected, it will become increasingly common to make use of Web services to build distributed applications. This might happen on many scales, from the micro to the macro. At the micro level, a programmer could use a Web service to provide a small parcel of functionality to his or her application. Someone writing a word-processing program might use Web services to provide access to specialized spelling checkers, or the writer of a spreadsheet might use Web services to give access to financial information. On the macro scale, entire applications could be exposed as Web services so that users could subscribe to software rather than buy it. In the future, it might be possible to pay Microsoft to subscribe to Microsoft Office rather than buy it. Nothing would be installed on your computer, and every time you wanted to write a document, you would connect to the remote Office service.

Several pieces of infrastructure are needed to make Web services work, such as:

Let’s look at this infrastructure in more detail.

One of the major advantages of the Web service model over Component Object Model (COM) and Common Object Request Broker Architecture (CORBA) is the use of standard data formats and protocols over proprietary offerings. Clients can communicate with Web services in the following three ways:

The first two methods use HTTP in a way that will be familiar to anyone who has written code to talk to a Web server. The use of the HTTP GET command (which adds request data to the end of the URL sent to the server) and the HTTP POST command (which passes data in the body of the HTTP message) means that you can talk to Web services from almost any language. The third method uses the SOAP protocol that is being developed by Microsoft, IBM, and several other authorities. The advantage of SOAP over HTTP is that it enables clients and servers to exchange more highly structured information than is possible with the HTTP commands.

SOAP provides a way to call methods using XML and HTTP. The details of the method you want to call and any arguments you need to supply are formatted as an XML SOAP packet. The server parses the contents of the packet, makes the call, and sends back a reply packet, which is also in XML. SOAP gives you, in effect, an XML-based and HTTP-based RPC mechanism. SOAP relies on Worldwide Web Consortium (W3C) schemas to define the content of SOAP packets, and the use of schemas makes it possible to define and pass over structured data. SOAP isn’t a Microsoft invention, although Microsoft gives a lot of input to the committee that is defining the SOAP standard. There are SOAP bindings to many languages, and a growing number of applications are using SOAP to provide language-independent and platform-independent access to services. Binary protocols such as DCOM and CORBA often find it hard to work through firewalls, but SOAP is much easier to work with in normal commercial distributed environments because it uses HTTP to send and receive data. All three communication methods use HTTP as the transport mechanism, which means that Web services integrate very well with existing Web-based solutions.

Clients need to be able to obtain a description of how to interact with a Web service, such as the name of the service and what arguments it requires. Anyone who has worked with COM will be familiar with the idea of the COM type library, which contains a description of a COM object, its interfaces, and the methods they support. The Web Service Description Language (WSDL) provides the equivalent of the type library in the .NET Framework. WSDL describes the methods exposed by a Web service and the in and out parameters they require, and as you might expect by now, it provides the information using XML. The format of WSDL files is quite complex, and because of the tools provided for you in Microsoft Visual Studio .NET, you won’t need to work with it directly, so we won’t mention it further.

You might want to advertise the Web services that your server supports so that clients can find your service from elsewhere on the Web. DISCO (Discovery of Web Services) is a SOAP-based protocol that defines a format for description data, along with a protocol for retrieving the data. If you want to advertise your Web services, you post DISCO files on your server. Clients can use these files to navigate to the appropriate WSDL files that describe the Web services in detail. You can choose to advertise your services by static or dynamic advertising. Static advertising makes use of DISCO files that point to WSDL documents.

DISCO documents always contain a discovery element as the root and define the disco namespace (which is used to tag the discovery element) and the scl namespace. The scl namespace is used to tag the contractRef elements that point to WSDL files and to tag discoveryRef elements that point to DISCO files on linked sites. Dynamic advertising means that all Web services under a URL will be advertised automatically if you include a dynamic discovery file in the directory. Dynamic discovery files look like this:

If you place this file in the root directory of a Web server, all Web services under the root will be automatically advertised. However, you can use exclude elements to omit some directories from the search path, like this:

The exclude element can be used to speed up the search by omitting directories that don’t need to be searched. It can also be used to hide Web services that aren’t publicly available. If you create Web services using Visual Studio .NET, you’ll get a dynamic discovery file created for you.

Web services are supported by several namespaces in the .NET Framework, as listed in the following table.

The System::Web::Services namespace contains the classes that you use to create and use Web services. It isn’t a large namespace, and the three main classes are listed in the following table.

Web services will often derive from WebService class, but doing so is necessary only if you want access to the common Microsoft ASP.NET objects, as listed in the following table.

The WebService class defines the optional base class for XML Web services, which provides direct access to common ASP.NET objects, such as application and session state. The following tables list the members exposed by the WebService type.

Because you might want to expose C++ code as Web services, Visual Studio .NET contains tools to help you build and deploy Web services.

To create and use the Web services described in this module, you will need to have Microsoft Internet Information Services (IIS) running on your machine. We will try this on Windows XP Pro SP2. You can check the IIS service in the Services snap-in shown below.

If you computer don’t has the IIS service you need to install the component using the Add and Remove Programs (Add/Remove Windows Component) that can be accessed from Control Panel. 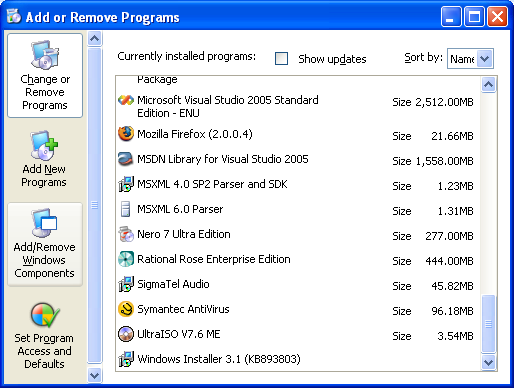 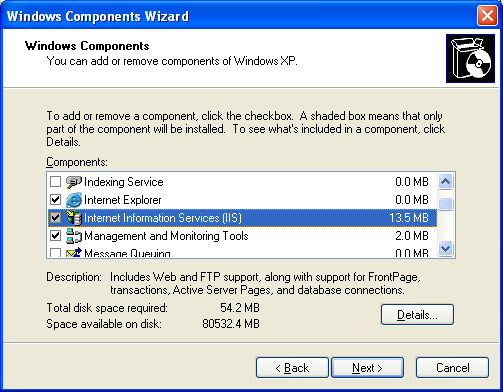 It’s also possible to write a Web service and then deploy it on another server, but doing so is outside the scope of this book. This exercise will show you how to create and deploy a simple service that implements methods to convert temperatures between Fahrenheit and Celsius.

1.      Create a new CLR project, and make sure that it’s an ASP.NET Web service project. Name it Converter. 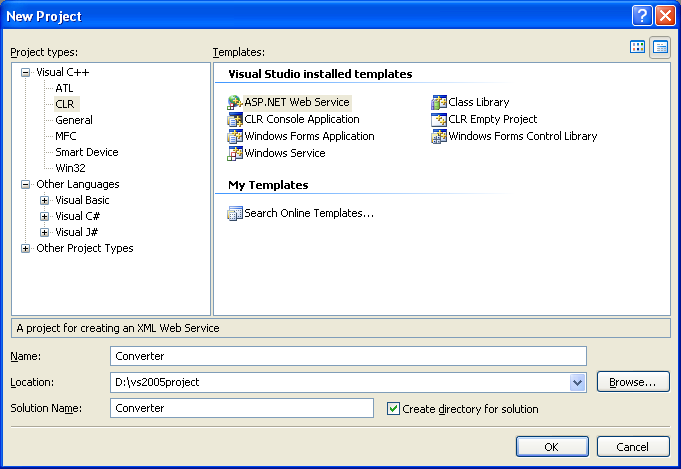 2.      The following is the project environment. 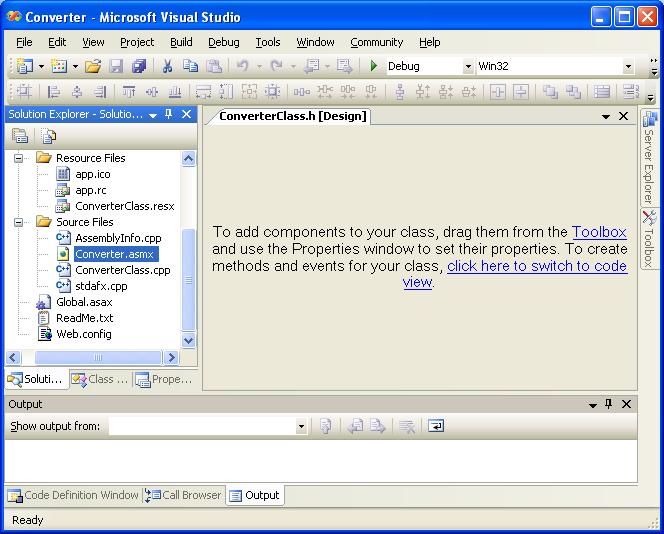 3.      When you look at the project details, you’ll find an .asmx file as well as the more familiar C++ source files. The .asmx file contains details that tell the Web server which class contains the implementation of the Web service. Open the file, and take a look at the contents.

4.      You can use HelloWorld to test a Web service, but let’s replace the function with a real one. Edit the class definition in ConverterClass.h to add the two conversion functions, making sure that you remove the dummy HelloWorld function. Notice also how we’ve added the WebService attribute to the class.

"temperatures between Fahrenheit and Celsius")]

[WebMethod(Description="Converts temperatures from Fahrenheit to Celsius")]

[WebMethod(Description="Converts temperatures from Celsius to Fahrenheit")]

A complete code is shown below. The Hello World part has been commented out.

"temperatures between Fahrenheit and Celsius")]

/// WARNING: If you change the name of this class, you will need to change the

///          the designers will not be able to interact properly with localized

[WebMethod(Description="Converts temperatures from Fahrenheit to Celsius")]

[WebMethod(Description="Converts temperatures from Celsius to Fahrenheit")]

/// Clean up any resources being used.

/// Required method for Designer support - do not modify

/// the contents of this method with the code editor.

// To test this web service, ensure that the .asmx file in the deployment path is

// set as your Debug HTTP URL, in project properties.

// TODO: Add the methods of your Web Service here

The Description of the WebServiceAttribute has been declared with string literals on two separate lines. If the C++ preprocessor sees two adjacent string literals, it will concatenate them, which provides an easy way to split long strings over more than one line. Web services are a very good advertisement for the use of attributes, and you can see here how attributes are used to add the necessary metadata to ordinary C++ classes and members. The WebService attribute provides a description and an XML namespace for the service that is used to distinguish it from other services on the Web that might have the same name. You can also use this attribute to supply a name if you want the service name to be different from that of the namespace and class. The WebMethod attribute shows that these two methods are exposed by the Web service.

5.      Implement the ConvertC2F and ConvertF2C functions by editing the ConverterClass.cpp file so that it looks like this:

A complete code is shown below.

// To test this web service, ensure that the .asmx file in the deployment path is

// set as your Debug HTTP URL, in project properties.

6.      Build the project. The code will compile, and the Web service will automatically deploy on your Web server. You can verify that the service has been installed by looking at the Web server’s Inetpub\wwwroot directory, where you should see a virtual directory with the same name as the project. 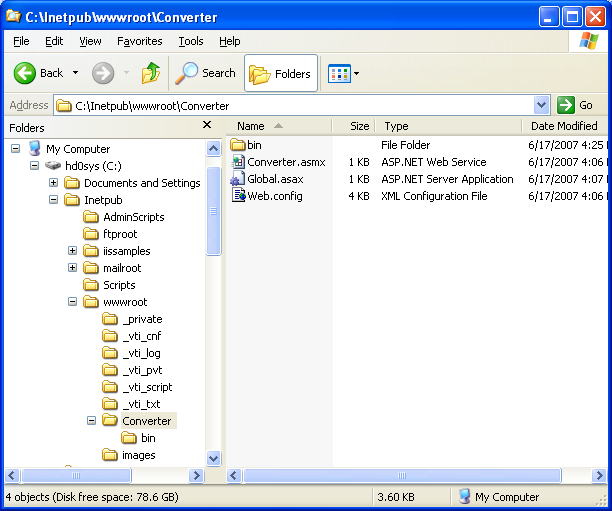 And that all. Some Web services will obviously be more complicated, but creating a Web service can be as simple as adding some attributes to a class.