More On Arrays and Collections 10

The SortedList class, also defined in the System::Collections namespace, represents a collection of keys and values pairs that are sorted by the keys and are accessible by key and by index. The syntax is:

A SortedList is very similar to a Hashtable, which also maintains key/value pairs, but the SortedList maintains its data in sorted key order and allows you to access items by index as well as by key. In this section, you’ll see how the SortedList class works, and you’ll be able to apply what you learn to the Hashtable class as well. Because of the need to maintain a sort order, operations on a SortedList are usually slower than on an equivalent Hashtable, so only use a SortedList if you need access to elements by index as well as key. SortedList sorts its entries two ways:

The following exercise shows you how to create a SortedList and manipulate it. 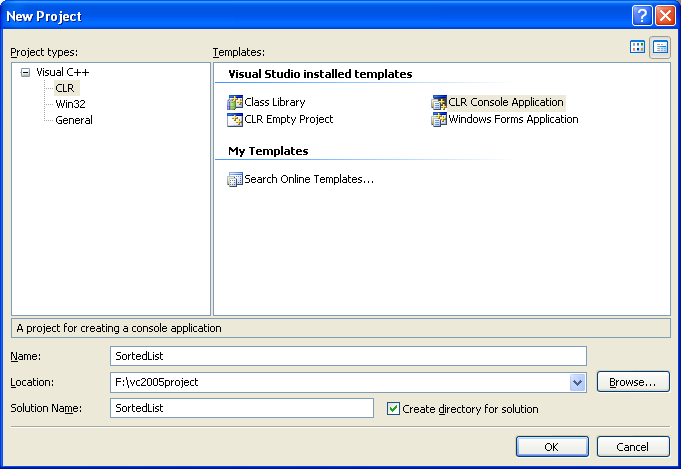 2.        Open the SortedList.cpp source file and try the following example on how to create and initialize a SortedList and how to print out its keys and values.

// Creates and initializes a new SortedList.

// Displays the properties and values of the SortedList.

The index sequence is based on the sort sequence. When an element is added, it is inserted into SortedList in the correct sort order, and the indexing adjusts accordingly. When an element removed, the indexing also adjusts accordingly. Therefore, the index of a specific key/value pair might change as elements are added or removed from the SortedList. Operations on a SortedList tend to be slower than operations on a Hashtable because of the sorting. However, the SortedList offers more flexibility by allowing access to the values either through the associated keys or through the indexes. Elements in this collection can be accessed using an integer index. Indexes in this collection are zero-based. The foreach statement of the C# language (for each in Visual Basic) requires the type of each element in the collection. Since each element of the SortedList is a key/value pair, the element type is not the type of the key or the type of the value. Instead, the element type is DictionaryEntry. The foreach statement is a wrapper around the enumerator, which only allows reading from, not writing to, the collection. Public static (Shared in Visual Basic) members of this type are thread safe. Any instance members are not guaranteed to be thread safe. A SortedList can support multiple readers concurrently, as long as the collection is not modified. To guarantee the thread safety of the SortedList, all operations must be done through the wrapper returned by the Synchronized method. Enumerating through a collection is intrinsically not a thread safe procedure. Even when a collection is synchronized, other threads can still modify the collection, which causes the enumerator to throw an exception. To guarantee thread safety during enumeration, you can either lock the collection during the entire enumeration or catch the exceptions resulting from changes made by other threads.