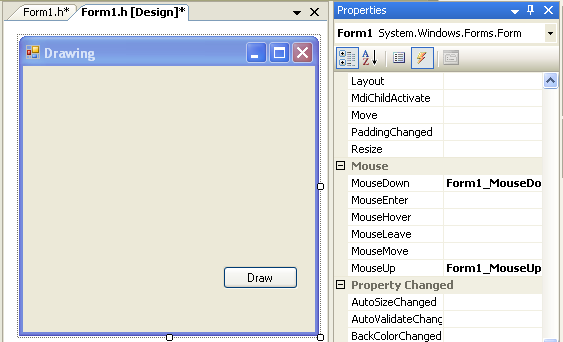 11.     Now edit the code for the MouseDown event handler so that it will save the position of the mouse pointer at the time the button was clicked.

The handler functions for mouse-related events get sent MouseEventArgs objects, which contain information about the event. MouseEventArgs has several useful properties:

In this example, you’re saving the X and Y values in the variable p1. Because p1 is a value type, you have to use dot notation to access its members.

12.     The MouseUp handler is similar, in that it also stores the coordinates. 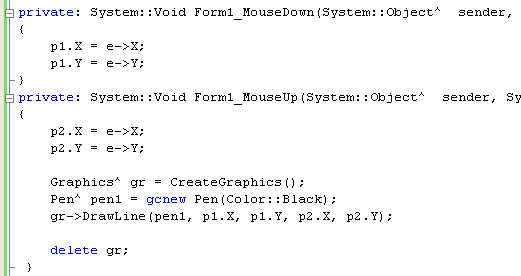 Once the coordinates have been stored, the function draws a line between the two points.

13.     If you build and run the application at this point, you should be able to draw lines on the form using the mouse. You’ll find, however, that they disappear whenever the form needs to be repainted, just as in the previous exercise. In the rest of this exercise, you’ll save coordinates of the lines as you draw them and then redraw the collection of lines whenever the form needs to be repainted. 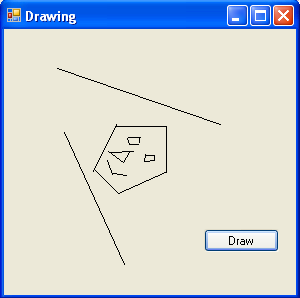 14.     You’re going to store the line information in an ArrayList, which is part of the System::Collections namespace. This namespace is already referenced in Windows Forms projects, so you don’t need to add a using directive to your code as shown below.

16.     Create the ArrayList object in the Form1 constructor, adding the line after the call to InitializeComponent.

17.     Add a new managed struct named Line to the top of the program, after the using directives and before the declaration of the Form1 class. 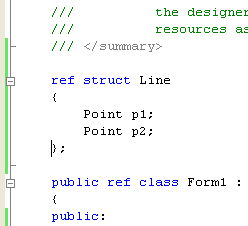 This struct simply holds two Points that represent the endpoints of the line. You could easily extend this type to hold other information, such as color and line style. Every time you draw a line, create a new Line object and add it to the ArrayList. Unfortunately when you go to the designer, the following error occurred.

Following the instruction also no avail. So what the hell is this? Searching the Internet for this message "Either VCProject or VCCodeModel is not ready yet. Please close designer and try again." error we found this, this, this. Also happened in Visual Studio 2005. 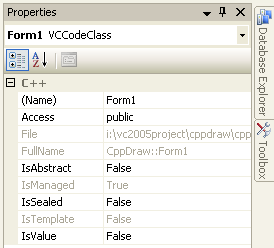 19.     Change the ref struct location just before the #pragma region. The Line struct properties is shown in the following figure. Well, no more designer error and if you still having the error, close and re-open the project solution.

20.     Add the following code to the end of the Form1_MouseUp function, after the call to DrawLine and before the call to delete: 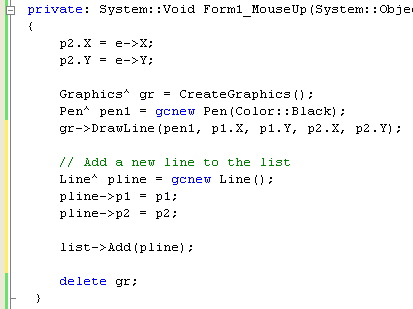 The Line object simply holds the Points that represent the endpoints of the line. 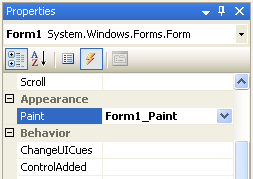 // Count member - Used to get the number of elements actually

// contained in the ArrayList.

// Use default for the Item ArrayList member

// element at the specified index.

// Then, cast to the Line^ type and assign to pline variable

The function first gets a Graphics object and then creates a Pen. When you’re handling a Paint event, you get a Graphics object as part of the PaintEventArgs argument; use this one, and don’t create your own. Likewise, don’t call Dispose/delete on this object when you finish with it; you didn’t create it, so it isn’t your responsibility to dispose of it. The code then loops over all the items in the ArrayList, retrieving each one and casting it from an Object^ (using the default get and set properties of the Item member) back to a Line^. Once this loop is finished, you can use the coordinates in the Line object to draw the lines.

22.     Build and run the program now. You’ll find that the lines you draw persist through minimizing, maximizing, and other window events that cause a repaint. Draw something and then try minimizing and maximizing the form. The drawing is persistent. 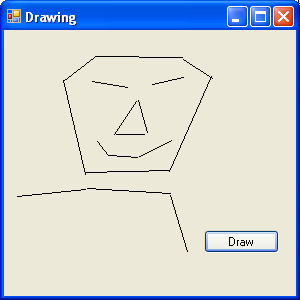