Two classes in System::Drawing are used to represent fonts: Font and FontFamily. A Font object represents a single font and specifies the font name, the size, and the style attributes. A FontFamily defines a set of fonts that share many characteristics but which might differ in font style. The following table lists the major properties of the Font class. Note that they are all read-only; once created, a Font’s properties can’t be changed.

The Style is composed of one or more values from the FontStyle enumeration, which has the members Bold, Italic, Regular, Strikeout, and Underline. The following short exercise will demonstrate how to create and use a Font to draw text on a form. You’ll enhance the existing application so that using the left button will draw lines and using the right button will draw a text string. 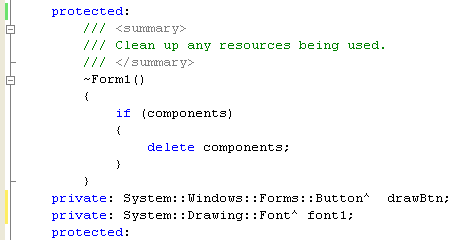 24.     You’ll need to use the fully qualified name, or the declaration will conflict with the form’s Font property. Create a Font object in the Form1 constructor.

Once again, you need to use the fully qualified name to avoid name clashes. The first argument is the name of the font, followed by the size. What the size represents depends on the last argument, which represents the units to be used. The GraphicsUnit enumeration contains all the valid units, which can be any of the following:

In this case, we are specifying 8 millimeters, which will be easily visible on the form. The font style can be any of the values from the FontStyle enumeration, combined with the bitwise OR operator (|) if you want to use more than one of them.

25.     Edit the Form1_MouseUp function so that it differentiates between the left and right mouse buttons. 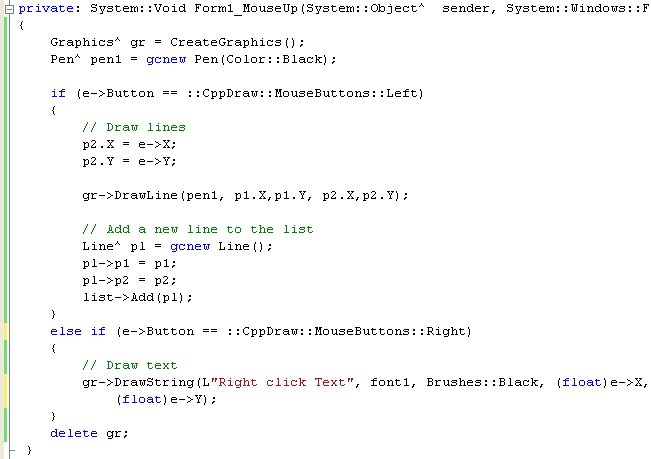 The function now checks which mouse button gave rise to the event. If it’s the left button, a line gets drawn. If it’s the right button, a string is drawn at the mouse position using the font you just created. The third argument to DrawString is a Brush, which defines the fill color or pattern for the text.

26.     Build and run the application. You should be able to draw lines and text using the left and right mouse buttons respectively. 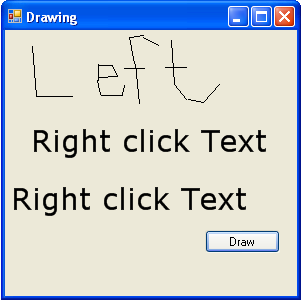 Note that the text isn’t persistent. Unlike the lines, it will disappear when the window gets repainted.