A static method is accessed by using the type name followed by the scope (::) operator and the name of the function. Now that you’ve seen how to implement the addition operator, it will be simple for you to implement the other arithmetic operators for the struct (subtraction, division, multiplication, and modulus).

You can also overload the operator functions themselves (function overloading). For example, suppose you wanted to handle the following addition operations:

You can add overrides of the operator+ function to handle this task. The following short exercise shows you how. 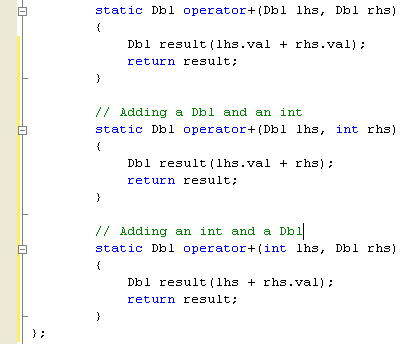 3.   Add two more additions to your main() function to test the new operator functions, plus some calls to Console::WriteLine to verify that the additions have worked correctly.

4.        Now for the interesting step: remove (or comment out) those last two operator overloads you added in the previous step, and then recompile the code and run it.

You should find that it works exactly the same as it did with the operators left in. So what’s going on? You can find out by using the debugger.

5.   Place a breakpoint in the code by clicking in the gray margin to the left of the code, next to the d3 = d1 + 5 line. You should see a red dot in the margin, showing that a breakpoint has been set.

7.  Press F11 again, and you’re finished with the constructor and back to the d3 = d1 + 5 line. Press it once more, and you’re in operator+, where you might expect to be.

Why did you get an extra call to the Dbl constructor? Because the compiler saw an integer in the code, but it only has an operator+ function that takes two Dbl values. However, because the Dbl struct has a constructor that takes a double, the compiler has cast the integer as a double and then used the constructor to create a temporary Dbl object to pass to the function. When you’re in the operator+ function, if you examine the arguments in the Locals window, you’ll see that they are both of type Dbl and that the rhs argument has the value 5.0.

You can see that, provided your types implement the correct constructors, you can sometimes use one operator overload to perform several different conversions.