The constructor uses a System::DateTime object to hold the current time; this object is initialized by a call to the static DateTime::Now property. The individual fields are then saved into the appropriate members of the object.

// The assignment operator for the Dbl struct

// Copy over the value 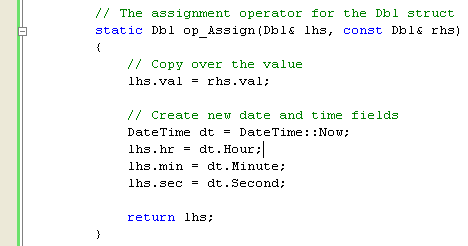 You’ll notice several things about this function. First is the fact that it uses references for the arguments. Passing values by reference does not cause a copy to be made. Instead, the name you use in the function is a link back to the argument that was passed in. Passing in values by using references is essential when you think about how assignment has to work. Let’s say you code a line like this:

You want obj2 to contain the values from obj1 when the function returns. If you pass the arguments by value, without the &, any changes to lhs will be lost because this local variable ceases to exist at the end of the function. Making the arguments to the function references provides a link back to the value that was passed in, so changes made to lhs will be persistent. The rhs (right hand side) argument is made a const reference because you don’t want to make changes to the right side and the keyword const ensures that you can’t. The val member is copied over, and then a new set of time members is generated so that the object will reflect the time it was assigned, not the original time it was created.

To test the changes, you have to arrange some sort of time delay between creating the object and assigning to it so that you can see that the times are different. The easiest way to do this is to use the static Sleep method from the System::Thread class, so add the following code to your main() method:

4.  The best way to see the result is to run the code under the debugger. Place a breakpoint in the code on the line where the one object is created by clicking in the gray margin to the left of the code. You’ll see a red dot appear, indicating an active breakpoint.

5.  Run the program by pressing F5, and the code runs until the breakpoint is reached. Press F10 to single-step over the creation of the one object. Now look in the Locals window, and click the plus sign (+) to the left of one to expand it. You see the time values assigned to the object.

6.  Now press F10 to single-step through the code, past the call to Sleep. When you pass the assignment, you see that the data members in one change; val takes on the value of the val member from two, while the time reflects the time when the assignment was done.

7.        Build and run your program. The output should be something shown below.

Let recap, the assignment operator (=) is, strictly speaking, a binary operator. Its declaration is identical to any other binary operator, with the following exceptions:

The following example illustrates how to declare an assignment operator:

// Right side is the argument.

Note that the supplied argument is the right side of the expression. The operator returns the object to preserve the behavior of the assignment operator, which returns the value of the left side after the assignment is complete. This allows writing statements such as: