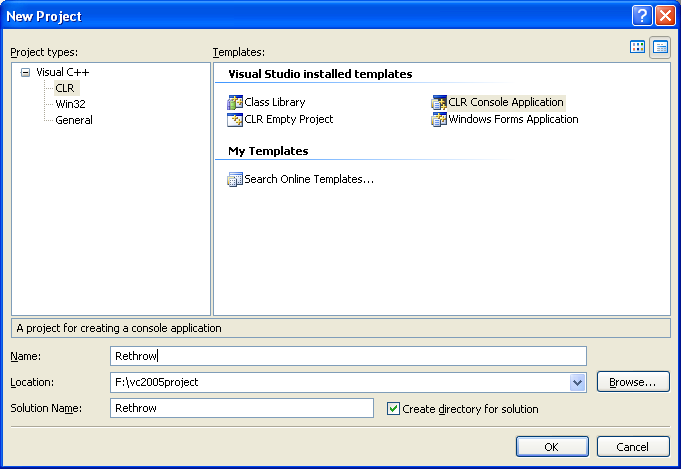 2.        Immediately after the using namespace System; line and immediately before main(), add the following function definition:

This function is basically the same simple function you met at the start of the module, which throws a System::ArgumentException when it has passed a negative argument. The difference here is that the exception is being caught within the function.

4.        If you run this code, you’ll find that the exception is caught locally in func and the catch block in main() doesn’t execute.

5.        Modify the definition of func so that it re-throws the exception after handling it.

Using throw without an argument re-throws the current exception, and it can be used in this way only within a catch block. At this point, the runtime goes off looking for another handler, which means moving up the call stack to the main() function, where the exception gets caught a second time. If you run this code, you should see the “Exception caught in func()” and “Exception caught in main()” messages printed.

Note that you don’t have to re-throw the same exception; it’s quite usual to catch one type of exception, handle it, and then re-throw an exception of another type. You’ll see an example of this in the section on creating your own exception types later in this chapter.

Managed C++ adds a new construct to traditional C++ exception handling, the finally (the old version is __finally) block. The purpose of this block is to let you clean up after an exception has occurred, and the following short exercise shows how it works. Note that the finally block is always executed, even if no exception was thrown. The catch block is only executed if a managed exception is thrown within the associated try block.

1.        Reopen the project from the previous example if you closed it.

2.        Modify the main() function so that it looks like this, adding a finally block after the catch block:

Console::WriteLine(L"This is the finally block");

3.        If you try executing the code, you’ll find that the finally block gets executed after the catch block.

4.   Modify the main() function so that the second call doesn’t cause an exception, either by changing the value or by commenting it out (changing it to n = 4 in this example). When you run the program again, you’ll see that the finally block still gets executed, even though there was no error.

The purpose of this block is to ensure that if you do something in the try block, such as opening a file or allocating some memory, you’ll be able to tidy up whether an exception occurs or not because the finally block is always executed when execution leaves a try block. This construct gives you a way to clean up what might otherwise require complex coding. The following is another very simple example to describe how to using finally.