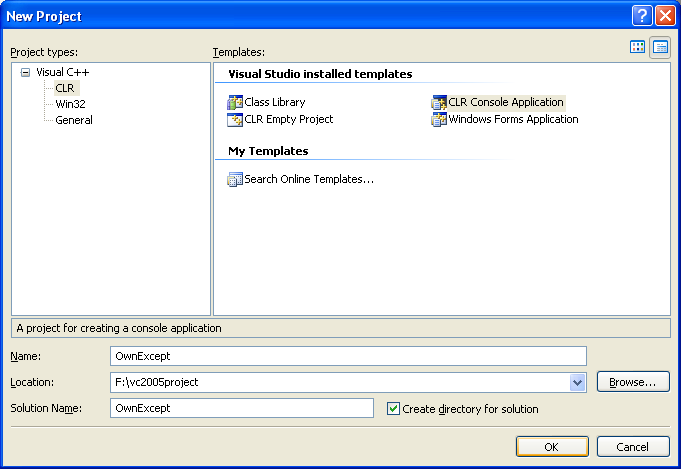 This custom exception class is a managed class that inherits from System::Exception, and it extends Exception by adding a single field to hold an error number. The class constructor takes a message and a number, and passes the message string back to the base class. We’ve made the errNo field public. Although you’re normally advised to make all data members of classes private, you can make a case for having public data members in certain circumstances. Once you’ve created an Exception object and passed it back to the client, do you care what the client does with it? Exceptions are “fire and forget” objects, and you’re normally not concerned with the integrity of their state once they leave your code in a throw statement.

3.        Add the following function definition immediately after the class definition:

The function checks its argument and throws a System::ArgumentException if it finds a negative value. This exception is caught locally, and a message is printed. Now we decide that we really want to handle the exception elsewhere, so we create a new MyException object and re-throw it, initializing it with the message from the original ArgumentException.

4.        Test the exception handling by calling the function in the program’s main() routine.

In the preceding code, notice that it’s necessary to box the error number before it can be used in a call to WriteLine because the formatted overloads to WriteLine need a list of Object^ pointers, and boxing lets you use a built-in type as an object.

In the preceding example, you implemented the custom exception as a managed class (declared using the ref (__gc for old syntax) keyword), but it’s also possible to use value types (declared with the value (__value for old syntax) keyword) as custom exceptions. The difference comes when you want to use value types as exceptions because you need to throw a pointer to a managed type. Getting the pointer is not a problem with ref classes because you always create them using gcnew (new for old syntax) and you always get a pointer returned. Value types are created on the stack, and you operate on them directly, rather than through pointers. If you want to get a pointer to a value type, you have to box it. Boxing wraps, or boxes, the value type in an object and returns a pointer to it. Here’s an example of how you’d use a value type as an exception:

The call to the Object^ function wraps the struct in an object box and returns a pointer to the object, which can then be thrown.