CheckBox and RadioButton can both fire events when the Appearance and Checked properties change, and CheckBox also fires an event if the CheckState changes.

Using Radio Buttons as a Group

It's common to use radio buttons to let users select one of a set of options. To do so, you provide a set of radio buttons inside a group box control; the group box not only encloses the buttons visually, but also makes them act as a group, ensuring that when any one is selected, the others are deselected. The following exercise shows you how to set up a group box containing radio buttons on a form.

32.     Continue with the CppForm project. Open the Toolbox, and drag a GroupBox, under Containers control category onto the form. Use the Property editor to change its Text to read Language, its Size to 200, 104, and its Location to 24, 64. 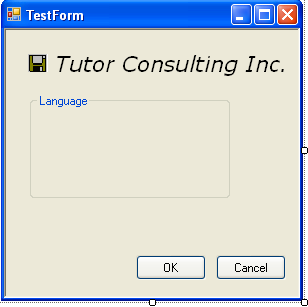 34.     Add another two radio buttons to the group box, positioning them below the first. Set their Text properties to C# and C++, respectively.

35.     Build and test the application. You should see the radio buttons displaying inside the group box, and you should find that when you select one button, all the others are unchecked. 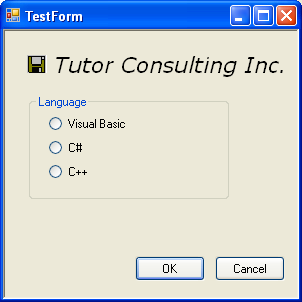 36.     By default, none of the buttons are checked when the application starts. To start with one of the buttons checked, use the Properties editor for the Visual Basic radio button to set its Checked property to true. 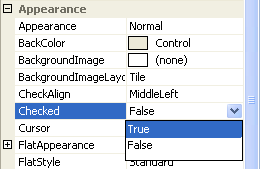 37.     Build and run your application. The Visual Basic radio button will be checked at the beginning. 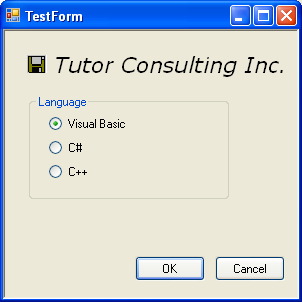 List boxes and combo boxes are common features of Windows applications, each representing a scrollable list of items. The ComboBox class differs from the ListBox class in that ComboBox is able to display an item in a TextControl above the list. These two classes have many features in common because they both derive from the ListControl class, which provides some common functionality. The table below shows commonly used properties of the ListBox class.

ListBox also supports a number of methods, the most commonly used of which are summarized in the table below.

The main event fired by the ListBox class is the SelectedIndexChanged event, which is fired when a user selects a new item in the list. The ComboBox class has a similar set of methods and properties, as outlined in the two tables below.

A combo box can have one of the following three Styles:

As with ListBox, the main event fired by the ComboBox class is the SelectedIndexChanged event, which is fired when a user selects a new item in the list. The following exercise will show you how to set up a combo box and respond to the events it fires, and you'll find that list boxes work in very much the same way.

39.     Drag a ComboBox from the Toolbox onto the form, and change its Name to combo1.

40.     Set the DropDownStyle to DropDownList, which means that the user has to click the button to the right of the text box to display the list, and that the text in the text box can't be edited. The Text property is blanked out automatically.

41.     To add some strings to the combo box using the Properties editor, first find the Items property. Click the browse button to the right of the (Collection) string, which will display the String Collection Editor. Type in three values - Beginner, Intermediate, and Advanced - one per line, and press OK to dismiss the editor when you're done. 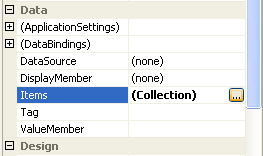 42.     To display the first string in the combo box when the application starts, you need to set the SelectedIndex property. This cannot be done using the Properties editor, so add the following line of code to the Form1 constructor in Form1.h, immediately after the call to InitializeComponent. (This step just as an illustration to show how we can do the code editing of the source code and can be skipped.)

43.     When you build and run the application, the following message box will be displayed first before the main form.

44.     The SelectedIndexChanged event will be fired whenever the user selects a new item in the drop-down list. Use the Properties editor to display the events for the combo box by pressing the Event button at the top of the editor, the one marked with a lightning symbol. Find the SelectedIndexChanged event, and double-click in the blank right-hand column. A handler function will be added to the form class. Edit the handler code as shown here:

The function checks that the sender was combo1, and if so, it builds a String containing the index of the new selection. The String is built using the static Concat function from the String class, and to convert the SelectedIndex value from an integer to a String, it is first boxed so that ToString can be called on the resulting object. The final string is displayed in a message box so that you can be sure the selection has happened.

45.     Build and run the project, and you'll see a combo box on the form that displays three items. You should also get a message box displayed whenever you select a new item. 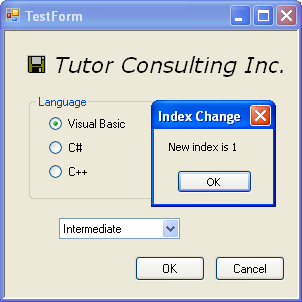