Text boxes can be single-line or multiline, which is controlled by the Multiline property. Multiline text controls will use newline characters to break lines, whereas single-line controls will display newline characters as control characters (which usually display as a short vertical bar). The Lines property holds an array of Strings that is used to represent the lines in a multiline edit control. Text controls maintain an undo buffer, so it's possible to undo changes. Because it's possible to clear the undo buffer, you should check the CanUndo property before trying to undo operations. The TextBox class adds several properties to the ones it inherits from TextBoxBase, as shown in the following table.

The following exercise shows you how to add an edit control to the form and manipulate the text it contains.

46.     Open the CppForm project, if it isn't already open. The form was created with the default size of 300 by 300 pixels. To create more space to display a text box, set the form's Size property to 456, 400 to give enough space to display the text box next to the group box or you just can drag the edge of the form in the design page to resize it. Select both the OK and Cancel buttons, and drag them to the lower- right corner of the form. Reposition combo1 by setting its Location property to 256, 72. 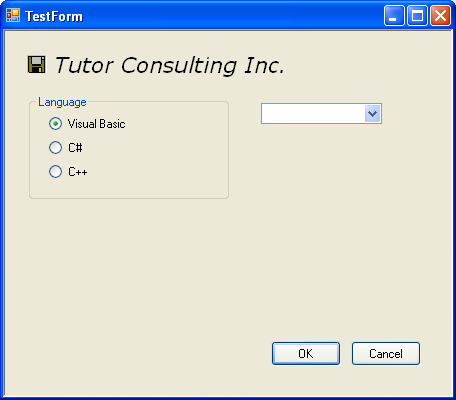 48.     Position the text box just to the right of the group box and below the combo box, and use the Properties editor to set the Multiline property to true so that it can display more than one line of text. Then its Size to 100, 150. 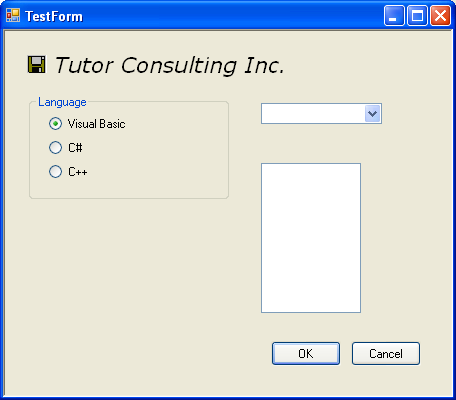 textBox1->Text = "You have selected the Visual Basic option.";

else if (sender == radioButton2)

else if (sender == radioButton3)

The handler checks which of the radio buttons have originated the event and puts some appropriate text into the text box. The third radio button puts two lines of text into the text box, separated by a blank line. The \r\n acts as a line break. If you haven't seen it before, putting two string literals next to one another on adjacent lines isn't an error. If the C++ preprocessor sees two literals next to one another, it automatically concatenates them into one before sending the string to the compiler. This functionality makes a neat way to split long string literals across lines.

50.     Build and run the program. You should now be able to click the radio buttons on the form and see text displayed in the text box. 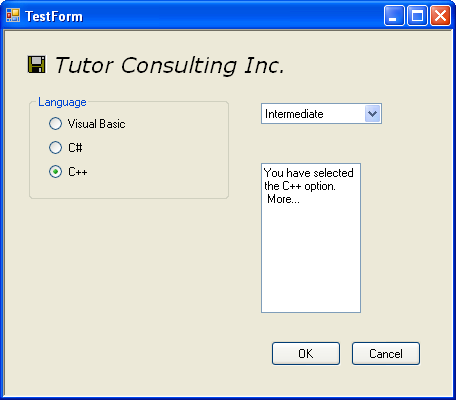 Menus are a well-known feature of most GUI programs, and the Forms namespace contains a complete set of classes for building and working with menus. Menus in Windows Forms applications are represented by two main classes: MainMenu represents the menu bar that sits at the top of a form, while MenuItem represents all the items that make up the menus attached to a MainMenu. A MainMenu has a collection of MenuItems, and to model the hierarchical nature of menus, MenuItems themselves can have collections of other MenuItems. In use, menu items bear some similarity to buttons: they are both distinguished by their text, and both fire a Click event when they are selected. It probably won't surprise you to learn that you set up handlers for menu items in exactly the same way as you do for buttons.

There are a number of well-established guidelines relating to how menus ought to be constructed and presented to the user, and we'll give a brief outline of some of the more important ones here. First, it is convention that the leftmost menu on the menu bar is called File and the last item on the File menu is the one that exits from the program. It's usually called Exit. Likewise, the rightmost item on the menu bar should be the Help menu, which will contain entries to help the user access the Help system and probably an entry to show the program's About box. Menu items that are going to display a dialog box should end with an ellipsis (...); for example, About.... Menu items that are going to have an immediate action, such as exiting the application, shouldn't use an ellipsis. To help users navigate around menus, assign access keys to menus by putting an ampersand before one of the letters in the menu caption; for example, &File associates the access key F with this menu item. Users can navigate through menus by holding down Alt and typing the access keys. You can also assign shortcuts to individual menu items, such as Ctrl+P for print, and these should be added to the most frequently used menu items. Drop-down menus shouldn't be too long; any more than 10 entries are probably excessive. Consider using hierarchical menus. Menus shouldn't let the user do anything that isn't sensible. For example, if there are no files open, an application shouldn't let the user select the Print option. There's nothing to print, so it's just confusing to be able to select the item. It's good practice to dim (disable) menu items that don't apply in the current context. Some applications dynamically add and remove menu items, but this tends to lead to confusion because users can't remember how to make a particular menu item reappear!

The following exercise will show you how to add a simple menu to the application's main form.

51.     Continue working with the same project you've been using throughout this module.

52.     Drag a MenuStrip from the Toolbox, and drop it onto the form. You will see that an icon labeled as menuStrip1 is displayed in a special area at the bottom of the designer screen. 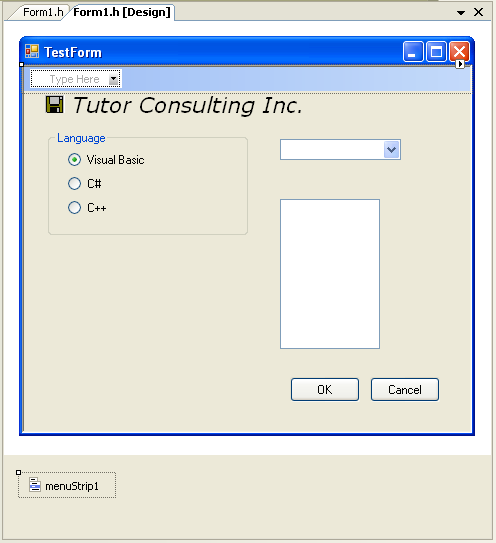 Controls that have no visible presence on the form display in a separate area at the bottom of the designer. Only controls that can be seen at run time display on the form.

53.     You will see a menu-like feature has been added to the top of the form, with a rectangle toward the left that contains the text Type Here. Click in that rectangle, and type &File to add a menu item. 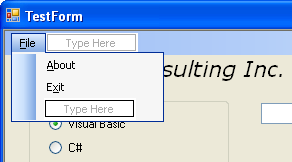 56.     You provide menu items so that the user can select them and execute code. Double-click the About menu item to add a handler, and add the following code to the function:

57.     Add a second handler for the Exit menu item, but this time use it to exit from the application.

// Exit from the application

58.     Build and run the program. You should see that the form now has a menu bar at the top, and you should be able to select the menu items. Test both menus.

59.     To add a separator bar to a menu, select the menu item above which you want the separator. Right-click the item and select Insert Separator from the context menu. The following figures show the steps. 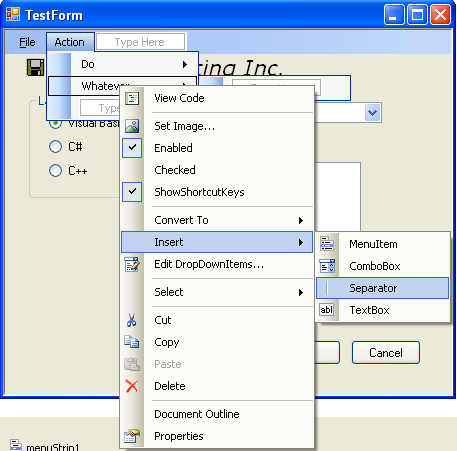 The Checked and Enabled properties can be used to display a check mark next to a menu item and to dim menu items that aren't currently active. Simply set the requisite property to true or false in the Properties editor, as required. Note that the Properties editor gives you a way to set the initial values of properties. You can always change them later programmatically. The following figures show setting the Checked to true for the Do menu item and Enabled to false for the Whatever' menu item. 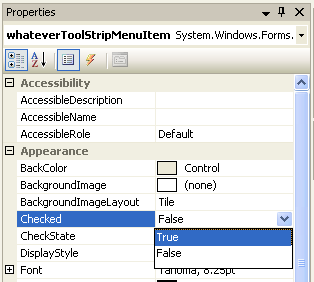 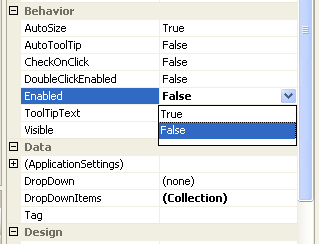 61.     Continue working with the same project you've been using throughout this module.

62.     Drag a ContextMenuStrip from the Toolbox onto the form. It will display at the bottom of the form, next to the menuStrip1. 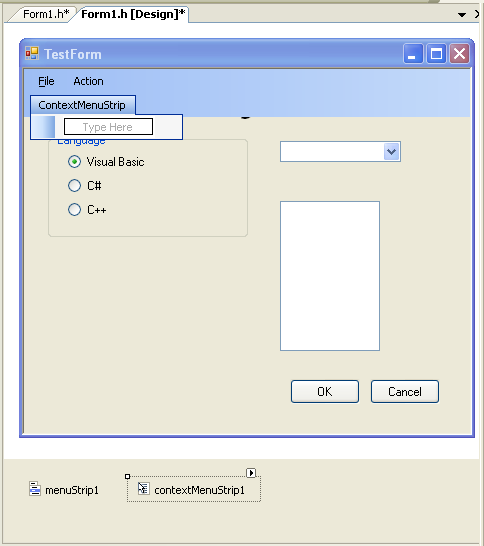 63.     Add some items to the ContextMenuStrip in the same way that you did for the main menu. You will see that the menu items display at the top of the form, as if you were editing a main menu. Add three menu items: One, Two and Three vertically shown below. There are no events fired for those menu items. 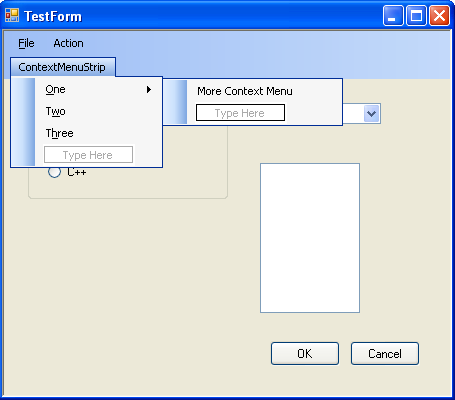 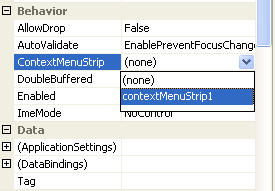 65.     Build and run the code. You'll find that you can display the context menu by right-clicking the form. 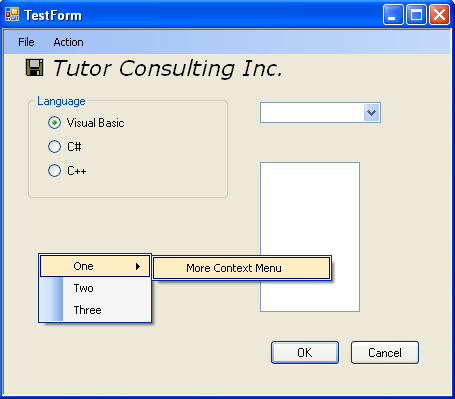 67.     Build and run your project. You have menu item with an image. You use handlers with items on context menus in exactly the same way as with main menus. 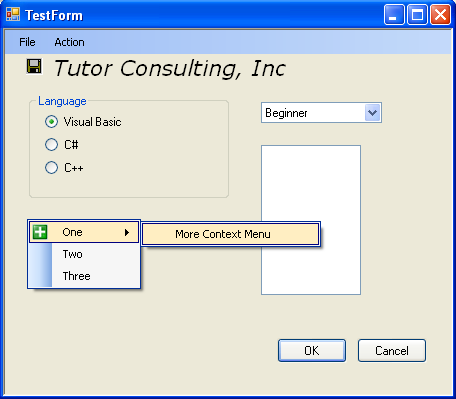 Well this introduction module to the Windows Form should provide you enough motivation to explore more!