You might be slightly puzzled by the description of the None entry and we need to explain how DialogResult works. A user will typically dismiss a dialog box by clicking a button, and you’ve already seen how the handler for the OK button was used to close the About box in the previous exercise. If you want to pass back a return value from a modal dialog box, assign one of the values from the table to the form’s DialogResult property. However, doing so has the effect of assigning the value and immediately closing the form. So you could replace the OK button handler in the previous exercise with the following code (provided that the DialogResult property to None):

Or just leave it empty after setting the DialogResult property value to OK. The caller can check the value returned from ShowDialog to find out what the dialog box returned. In fact, it can be even easier to close the form and send a value back to the caller. Button controls have a DialogResult property. If this property is set to a value other than None, clicking the button closes the parent form and sends the appropriate result back. 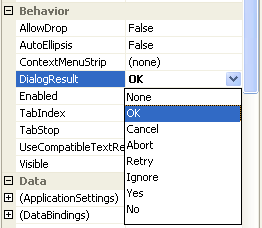 12.     Then you can tidy up the code by manually deleting the OKButton_Click function from Form1.h as shown below.

13. Build and run your application. When you select the About menu item and click the OK button of the About box, the About box will be dismissed as usual without adding any code.

It’s common to use dialog boxes to obtain information from the user. You often have to load data into the dialog box before displaying it and then extract the data that the user entered, usually when the user clicks OK. The following exercise is an example of a dialog box that displays information, lets the user change it, and then reads the changes when it is dismissed.

14.     Open the CppForm project if it isn’t already open. Right-click the project name in Solution Explorer, and choose Add and then Add New Item from the context menu. Make sure that the Windows Form entry is selected in the Templates pane under the UI Categories, and add a new form named MyDialog. 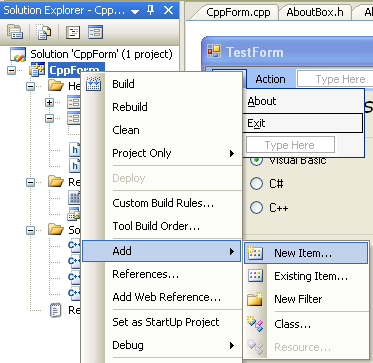 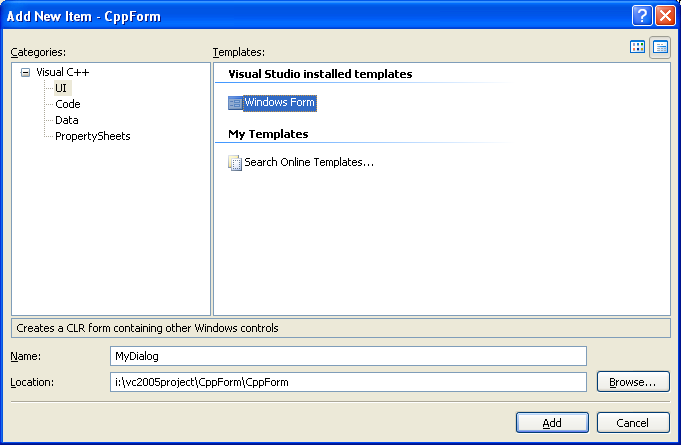 16. The dialog box is going to contain controls to gather a user’s personal details, which in this case will be name, phone number, and department. Each of these items will need a control and a label, and you’ll also need OK and Cancel buttons to dismiss the dialog box. Add the eight controls to the MyDialog form, arranging them to look like the following figure. We have three Labels, two TextBox, one ComboBox and two Button. 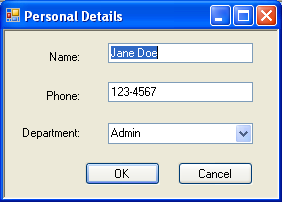 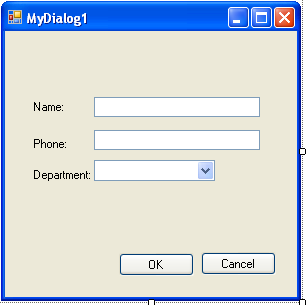 18. Use the Properties editor to set up the form and the controls. Set the form to be 280, 200 pixels in Size and rearrange all the controls. Use a Fixed3D FormBorderStyle and the Text is Personal Details. Set the TextAlign for the labels to MiddleRight. 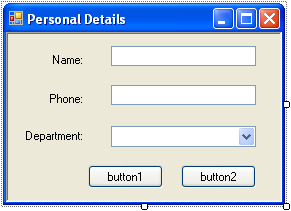 19. The combo box will hold a list of departments, and you can add these strings using the Properties editor. Select the ComboBox, find the Items property in the Properties editor, and click the ellipses (...) button to the right of the property. The String Collection Editor, which you can use to specify the strings that will be displayed in the combo box will open. Add the strings IT, Admin, R&D, Catering, and Manufacturing, one per line, and close the editor when you’re done. 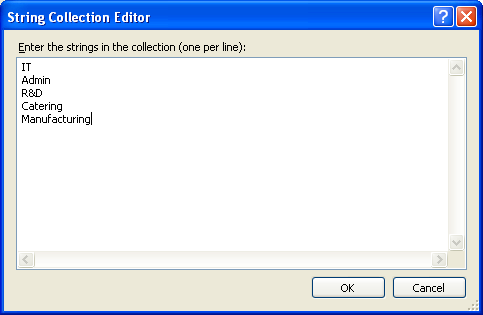 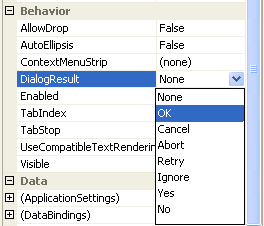 Because each button has its DialogResult member set, when they’re clicked, they’ll both dismiss the dialog box and return a DialogResult to the calling code. Here we do not add any handler for both buttons.

22. To let the calling code get and set the values in the controls, add properties to the class under the public, like the following.  Select the form, right click and select View Code, then add the code manually. 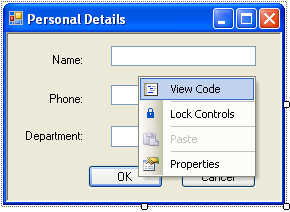 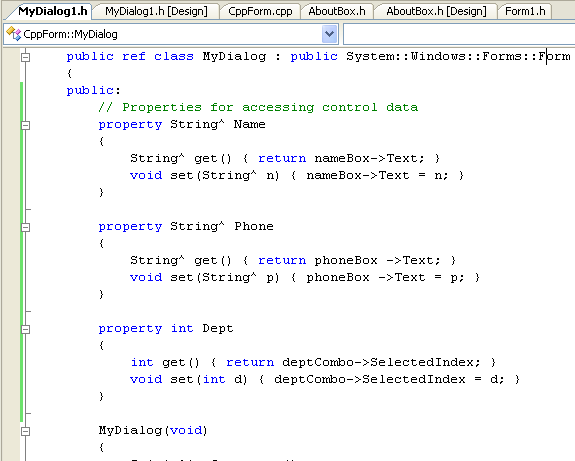 There’s a pair of get and set methods for each field in the dialog box, and these will let the user of the MyDialog class manipulate the data without giving them complete access to the TextBox and ComboBox objects.

23. Add the code to display the dialog box. Display the main form (Form1.h), add a new menu item to the File menu, and give it the text Display Dialog.... Remember that the ellipses (...) on a menu item name means that the item is going to display a dialog box. In the menu editor, select the Exit menu item, right click and select Insert. Select MenuItem, so that it is between the About and Exit items. Go to the Properties page and give the menu item the Name dialogMenuItem. 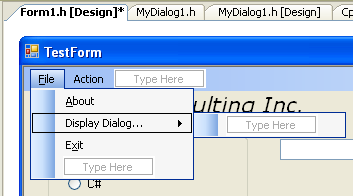 24.     Double-click the new menu item to create a handler for it, and edit the code as shown below for the handler so that it displays the dialog box.

// Fill in the initial data

// If it came back with OK, display the name 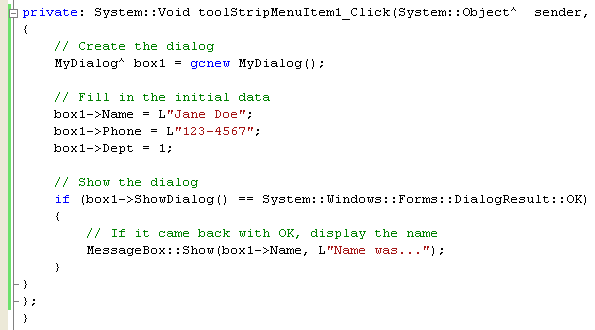 25.     Build and run the code, and when you select the Display Dialog... menu item, you should see the dialog box display with its initial data shown below. 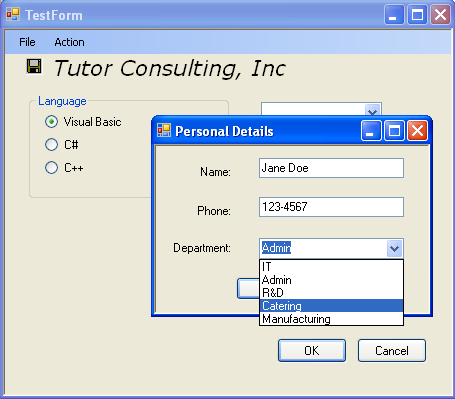 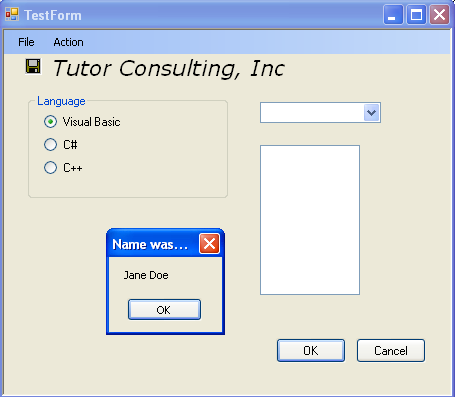 27.     Try change the default name and click the OK button. 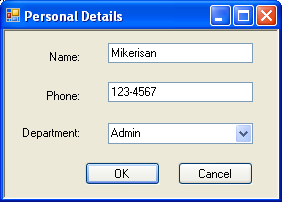