The following table lists the classes derived from System.Windows.Forms.CommonDialog.

All these dialog boxes inherit from CommonDialog, which provides protected members that are used internally by inherited classes; you don’t use such members in your code. These classes are used just like any other dialog box: You create a dialog box object, set its properties, and then display it by calling ShowDialog. The following exercise shows you how to use a Font dialog box to choose a font and then use it to set the font of the label control on the form.

You have to give the fully qualified name of the Font class, or else it will conflict with the form’s Font property.

30.     Add a new item to the File menu with the Text Choose Font..., its Name fontDlgMenuItem, and move it above the Exit menu item.

31. The Font object is going to be used to set the font of the label on the main form. To do this, you need to create a Font object and associate it with the Font property of the label. Place the following code in the Form1 class constructor, making sure that it comes after the call to InitializeComponent as shown below. Notice how the pointer to the Font is stored away in the labelFont member.

32. As you’ve done with other menu items, add a handler for the new menu item by double clicking it. Edit the handler function so that it creates and displays a FontDialog:

The code creates a FontDialog object and then initializes it with the current font represented by labelFont. ShowDialog displays the dialog box, and if it returns a DialogResult::OK status, it sets the font of the label to reflect the user’s choice. The Label control will immediately update itself to use the new font.

33.     Build and run the code, and you should be able to display a Font selection common dialog box, as shown in the following figure. 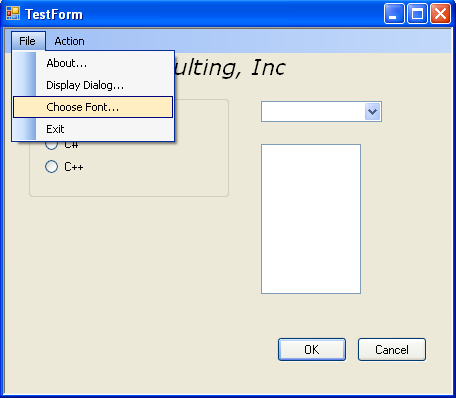 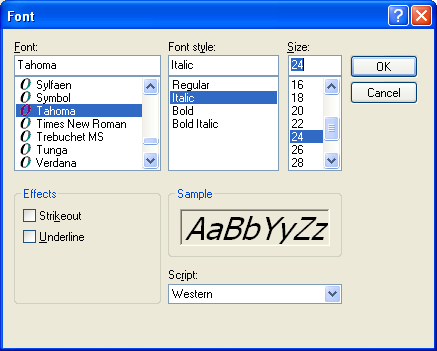 The System::Windows::Forms namespace provides you with a large number of controls that you can use to build program GUIs. The following table lists the major controls in the namespace. Keep in mind there are more controls for .NET framework newer version and also obsolete one. This based on the .NET 2.0. Currently the version is .NET 3.0, so get the latest version in order to have more controls. There are also third parties WinForm controls.

Tree view controls, which display a hierarchy of items as a tree, will be familiar to anyone who has used Windows Explorer. The System::Windows::Forms:TreeView class wraps the Windows tree view control and makes it simple to create and manipulate trees of items. Let’s look at the methods and properties provided by the class, and then the exercise will show you how to create and use a TreeView. A tree view is formed of nodes, represented by TreeNode objects, which exist in a parent/child relationship. Root nodes have no parent, and it’s possible for a TreeView to contain more than one root node. The following figure shows a typical TreeView. 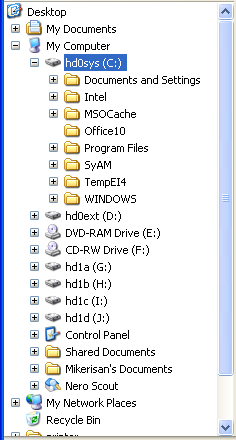 In this example, Desktop is the root node. Each node can have a label and an icon associated with it, and each node might have lines joining it to sibling and parent nodes. If a node has child nodes, it might display a button next to it that shows a plus sign (+). Clicking the plus sign or double-clicking the node label or icon will expand the tree to show the child nodes, in which case the plus sign changes to a minus sign. Nodes can have a pair of images associated with them, which are used to show expanded and collapsed nodes. Creating a TreeView is a matter of setting the control’s properties and then creating the TreeNode objects and linking them to form the tree. Both the TreeView and TreeNode classes have a Nodes property that holds a collection of child nodes. TreeView controls are complex, so the class has a lot of properties, methods, and events; the most commonly used are summarized in the following tables.

The following exercise will show you how to create and populate a TreeView control. We have several controls to discuss in the rest of this module, so you’ll use the controls to put together a Windows Explorer like file browser. It’s not a very sophisticated one, to be sure, but it will serve to show you the basics of working with these controls in a real application. 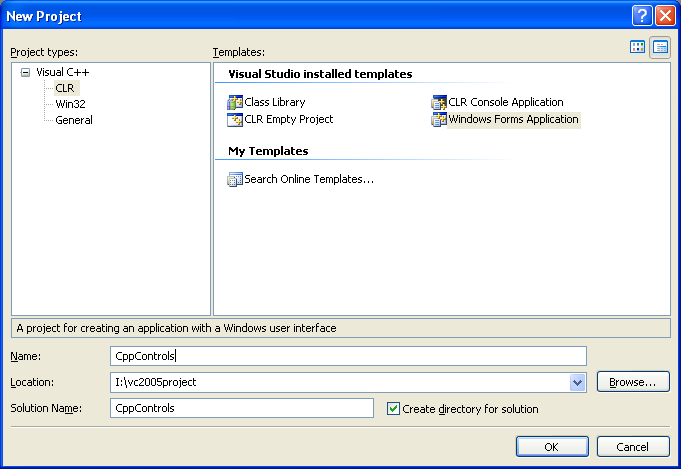 3.   Continue using the CppControls project you created earlier. Drag a SplitContainer from the Toolbox onto the form. Make sure the Orientation property is set to Vertical. Keep in mind there are two panels given, Panel1 and Panel2. Each panel has its own property page. We will use panel1 as TreeView container and panel2 as ListView container. 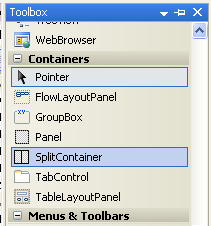 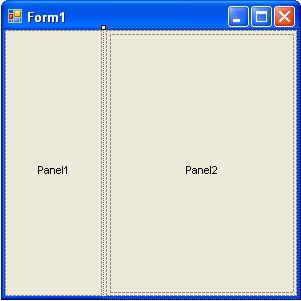 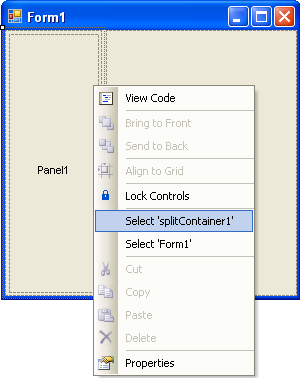 4.        Build and run the application. You’ll find that you can now move the splitter bar to resize each panel. 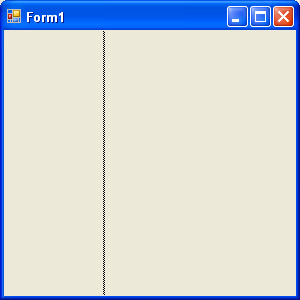 5.   Next, drag a TreeView from the Toolbox onto the form. Set its Dock property to Fill by selecting the property in the editor and picking the center bar from the graphical chooser that pops up. The TreeView will dock to the left side of the form and resize to use the full height of the form. Adjust the TreeView so that it fit in the panel1 container as needed. 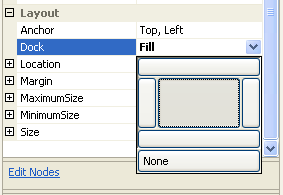 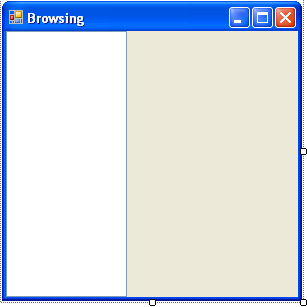 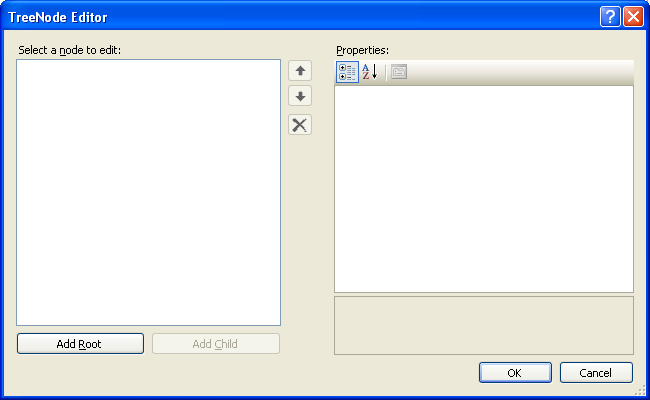 7.   Add a root node to the TreeView by clicking the Add Root button, and edit the Text to read Root. When you dismiss the editor, you should see the root node displayed in the TreeView. 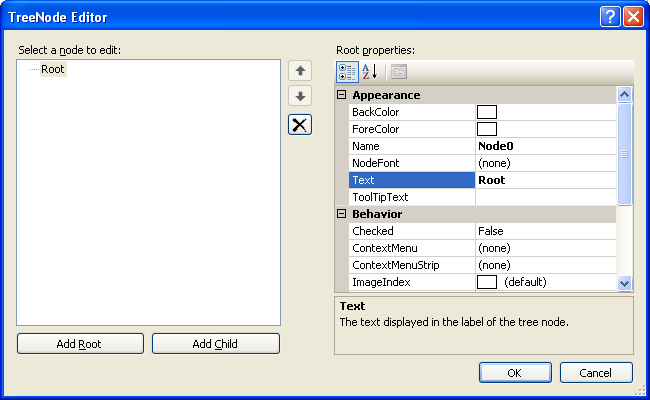 8.        Build and run the program. You should see something like the following figure. You can try using the splitter to resize the TreeView. 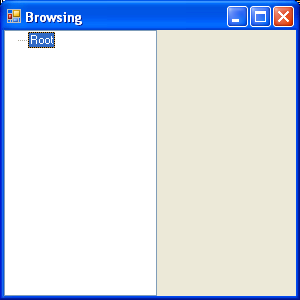 The TreeView is docked to fill the panel1 container and has one member, which is highlighted.